What if your water bottle didn’t just hold your water, but supercharged it into…

With the power to fight off free radicals and karate chop aging! Well, maybe 🙂

Say hello to KOR Plus! I have been using KOR+ and L-O-V-E it!

PIN for when you want to read or shop later.

Be sure to get to the end of the post for a SPECIAL OFFER FOR MY READERS FROM KOR+!

This beautiful bottle is unlike any other water bottle you’ve tried. You may have bottles that filter out the bad chemicals from your water, but do they ADD good stuff to your water at the same time?

Welcome the KOR Plus water bottle system. It’s like a Superfood in water form. We all need to drink water daily to stay hydrated, so it makes sense to take basic water a step further and upgrade it.

If you could drink water every day that not only hydrated, but also helped your body fight free radicals, improve your exercise performance and recovery, increase your oxygen levels, and defend your body against stressors… wouldn’t you drink it?

“KOR+ is a simple and easy, but revolutionary, approach to daily hydration.
It’s hydration with intention, practiced daily and consistently. With each sip,
the KOR+ adds molecular hydrogen (H2) and electrolytes to water,
while also pH balancing and purifying in real-time.”

How does KOR+ do it?

Well, quite literally at the core! At the core of the bottle, is the unique KOR+ filter, which is made from sustainable coconut shells infused with rare-earth minerals (FDA and NSF approved) and molecular hydrogen. Each time you take a sip, your water is first filtered and then enhanced so that with every drink you take, you are getting the “peak-potency benefits” from your KOR+ water.

What does KOR+ do?

Molecular Hydrogen (H2) – KOR+ adds H2 to your water. H2 is the little superhero that saves the day by revving up your body’s internal antioxidant system and neutralize free radicals. Studies have shown H2 to help increase performance, improve circulation, and speed up recovery time.

Antioxidants – The molecular hydrogen is an antioxidant that activates your bodies own antioxidant defense system to attack free radicals and fight disease.

Want to fight aging and wrinkles? How about a natural boost of energy
and faster muscle recovery time? KOR+ will be your new best friend!

Electrolytes – KOR+ adds calcium, magnesium, and potassium that go to work activating your muscles and help to regulate fluids. Bonus: with NO calories!

Alkalinity – Your water’s alkalinity (pH) is raised to a level above 9. Alkaline water neutralizes the acid in your body and increases oxygen levels. All without eating spinach (I personally love spinach, but bonus for those of you who don’t).

Filters and Purifies – Of course KOR+ filters out much of the chlorine and contaminants found in tap water.

That’s a lot of great stuff for one stylish little bottle and filter to do, right? Well, KOR+ makes it even better by making it all super easy for you to add into your life every day!

You simply order the KOR+ bottle and filter together one time, and then you can sign up to have a new filter sent to you every 30 days.

The KOR+ filters are meant to provide peak benefits for 30 days and then simply replace them for a fresh month of awesome water. It’s one subscription plan that can truly benefit your health every single day you drink your water.

We all want easy, convenient, and healthy. KOR+ checks off all these boxes.

3. Add the great stuff.
Molecular hydration (H2) and electrolytes are added while balancing the PH (alkalinity).

How often should you drink KOR+ water?

It’s recommended that you drink 3 bottles of KOR+ water a day to get the best benefits from the molecular hydrogen. A bottle in the morning, 1 before exercise, and 1 after exercise. KOR+ is simply added into your daily hydration.

I’ve been trying KOR+ for several days and truly love the taste of the water, and I am VERY picky about my water! It’s too soon to see the long-term benefits, but I am confident in saying that I will be continuing with the KOR+ subscription plan.

Who is KOR+ NOT for?

Really, no one. KOR+ can benefit everyone!

My personal tips:
Don’t drink KOR+ during exercise, with meals, or anytime you want to down a fast bottle of water. The filter slows the flow down in the filtration process, so it’s not designed to drink quickly.
Pay attention to the filter direction when you place it in the blue straw. The carbon coconut filter has a closed end and an open end. Be sure to put the closed end down and the open end up. I learned the hard way LOL. You won’t get any water through the filter if you put it in the wrong way.

So, KOR+ is sounding pretty amazing and you’re ready to give the beautiful bottle a try! Awesome!!! You picked a great time because KOR+ is giving my readers 20% OFF!

After years of chronic health problems with migraines and IBS, I began to realize drinking more water helped with many of my problems. When my mom developed Alzheimer's and osteoporosis, I decided to make a lifestyle change so that I didn't have the same future. Change isn't easy, but I hope that we can prevent chronic illness and disease by living a healthier life.

Concerned about your health and future, but feel like you're a hot mess when it comes to sticking with healthy lifestyle changes? Then we're friends already! I totally get you because I feel the same. Change is hard, so I'm here to support you while we transform our health through water, diet, and exercise. Let's grow our healthiest life together!

See products that you love? Shopping is always easier with some help. Water Me Daily is an Amazon Associate and Affiliate site. I earn a small fee from purchases made through my referral links at no additional cost to you. 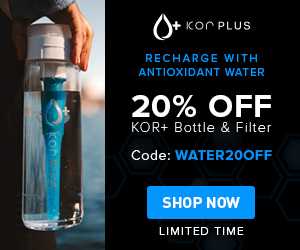 I use affiliate links